If there’s one area of the game that holds golfers back from playing to their full potential, it’s the short game.

Hitting longer, straighter drives is a great feeling. They deliver bragging rights and an ego boost. But if you’re committed to shaving a few strokes off your score, recreational players are well-advised to improve their short game skills. Getting up and down multiple times during a round is how you’ll consistently save strokes.

As all golfers know, making changes to your full swing can be complicated (and confusing). Amateur players often lack the time and commitment to practice new swing variations and ingrain the changes.

Short game techniques, by contrast, are far simpler. You can make changes more quickly; they’ll also be more effective once you do.

There’s a difference between chipping and pitching. Here’s a simple rule of thumb: If the ball spends more time in the air than it does on the ground, it’s a pitch shot. If it spends more time rolling than flying, it’s a chip shot.

From just off the green, the key to a successful chip shot is a crisp, solid hit and firm hand action. Employ a narrow stance slightly open to the target line with most of your weight on your left foot. Play the ball just inside the right foot and, with the hands well ahead of the clubhead, catch the ball on the downstroke. The club, hands and arms all work in unison. The idea is to land the ball on the green and roll it to the hole like a putt.

To become a short game whiz, you need to master the high-soft pitch and the low-running pitch.

Use the lofted pitch when you need to fly the ball over a bunker or other greenside hazard and get it to land softly. To play this shot, open your stance. Open the blade of your wedge. Move the left hand counterclockwise on the shaft, creating a weak left hand grip. What’s required is a crisp downward swing of the arms, with the hands leading the clubhead. Hit the ball first—then the turf. Take more of a backswing than you think you need. The ball’s quick rise into the air will reduce the distance it carries.

To execute the low-running pitch shot, use your normal full-swing grip and keep the pressure light. This will help you make a smooth, accelerating swing. Standing tall, position the ball slightly right of center in your stance to ensure a low trajectory. Turn the legs, hips and upper body together away from the target, letting the wrists hinge naturally. Start the downswing by turning everything back toward the target. Swing in rhythm; let the club do the work. 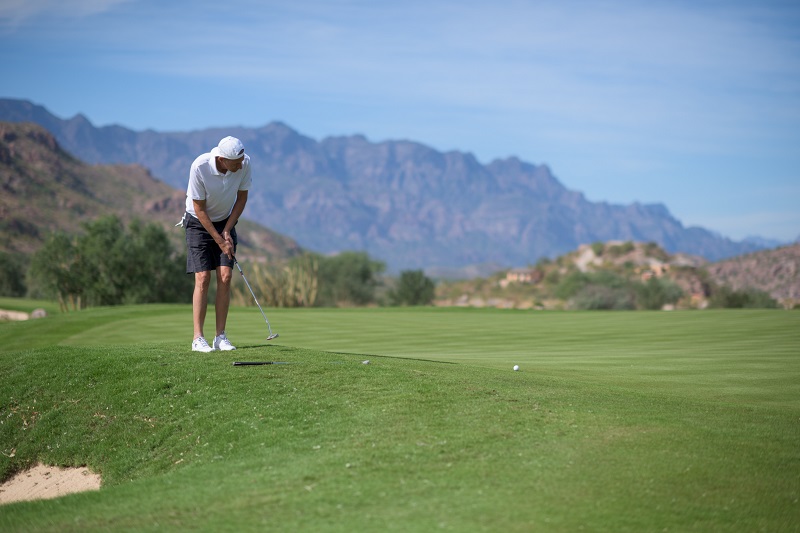 Here are the basic rules of sand play from the late Julius Boros, one of the greatest bunker players of all time:

The set-up for a basic sand shot from a greenside bunker should be done at address. Take an open stance, aiming feet, knees, hips and shoulders left of the target. To keep in balance, twist your feet into the sand. Focus on a spot an inch or two behind the hand. (Hit closer to the ball for longer shots, farther from the ball for shorter shots). Drop your hands to loosen the wrists, which promotes the ‘handsy’ takeaway a sand shot requires. Stop the backswing short of parallel, but always make a full follow-through to ensure you accelerate through impact.

Putting would appear to be the easiest action in golf. The stroke is short. The ball doesn’t get airborne. The terrain being traversed is the best tended on the course. Yet putting woes can bedevil golfers at all skill levels.

1. Find a putter you’re comfortable with. Locate your putter’s true sweet spot and mark it with a line.

2. There’s no one right way to putt. Anything that achieves the desired result is acceptable.

3. Good putting depends on a good grip. The idea is to keep the clubhead on line so the ball stays on line. Place the palms parallel to each other and parallel to the face of the club. The fingers regulate feel; the palms provide power. Grip pressure should be even with both hands—just firm enough to prevent any turning of the clubhead. Eyes should be set directly over the ball. The head must remain still throughout the stroke.

4. Envision your arms and shoulders forming a triangle. To make the putting stroke, keep the triangle intact, swing it away from the ball then back toward the ball, accelerating through impact. The true putting stroke is best described as a pendulum movement in which neither the wrists nor arms predominate.

Putting accounts for 43% of a modern player’s score. Clearly, holing putts is the key to lower scores–especially when coupled with improved chipping, pitching and sand play. 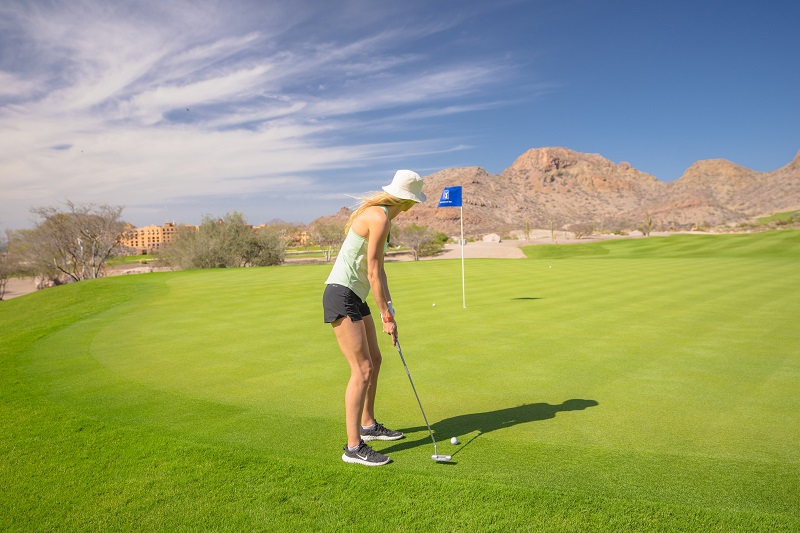 Aug 18 TPC = Tournament Players Club. What does it mean to...
Next Post
All together now… . . # golfcourse #mexico #mexi