The biennial Presidents Cup, pitting top-ranked U.S. players against a team of Internationals (from everywhere but Europe), is slated to be played at Quail Hollow Club in Charlotte, N.C. from Sept. 20 – 25.

For the record, match play is a form of play where a player (or players) compete directly against an opponent (or opponents) in a head-to-head match. You win a hole by completing it in the fewest number of strokes. You are victorious in a match when you are winning by more holes than remain to be played.

Match play, which dates back centuries to the game’s origins, is golf in its purest form. From the earliest tooth ‘n nail battles waged between shepherds along the coastal dunes of Scotland, match play has always been every amateur’s game of choice.

In match play, each hole is an individual contest. A high score results in one lost hole, not a major scorecard blemish, as in stroke play. In that sense, match play levels the field. Tactics and strategy are all-important. Sudden changes in fortune are common. So are emotional swings, from high to low and often back again.

When you watch the Presidents Cup later this month, you’ll notice that the best players focus on what they can control—their game—and not their opponent. To prevail, these players focus on the course and the challenge it presents. In match play, the key is to keep the ball in play and limit mistakes. The best match-play golfers steady their emotions and keep an even keel. The idea is to stay ‘in the moment’ and not get ahead of yourself. Food for thought as you’re coming down the stretch in your next big match at TPC Danzante Bay!

Here’s a few tips to help you come out on top in your next match.

In stroke play, it’s common to ’get loose’ on the first couple of holes. Not so in match play. Get out of the gate quickly. You want to put pressure on your opponent early in the match by going up a hole or two. Otherwise it’s an uphill battle.

Stick to what you’re good at. For example, if you’re a short but accurate golfer with a good short game, it matters not that your opponent is outdriving you by 50 yards. Play within yourself. There’s a built-in equitability to golf. It’s not how far, it’s how many. 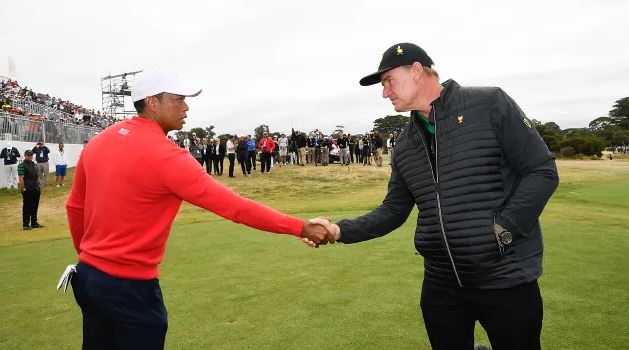 At the Presidents Cup (and the Ryder Cup), the winning team is the one that holes the most putts. Don’t be timid. Get the ball to the hole every time to give it a chance of dropping in. With the option to keep the flagstick in the hole as per the 2019 rules change, you can afford to be aggressive.

Anything can happen in match play–and usually does. Neutralize your emotions. Don’t get cocky when you’re ahead. Always be prepared for your opponent to chip in or sink a long putt or blast to gimmie range from a greenside bunker. This way you won’t be deflated or victimized by your adversary’s ‘miracle’ shot.

It’s golf. Stay patient. Stick to your routine. Forget about your overall score. If you have a bad hole, brush it off and accept the fact you’ve only lost one hole. Be aware at all times of where you stand in the match. Most importantly, remember that in match play it doesn’t matter if you take six strokes to complete a hole if your opponent is taking seven!