The great golf writer Herbert Warren Wind once wrote that the ideal practitioner of golf course architecture needed to have “the soul of an artist, the brain of an engineer and the heart of a golfer.” The description is more than apt for Rees Jones, the man behind the design of TPC Danzante Bay.

Born into the game of golf, Jones learned to play as a youngster and traveled with his family to golf courses all over the world, working in the summers for his father, renowned golf architect Robert Trent Jones, Sr. After college at Yale and graduate studies at Harvard, he went to work in 1965 as a principal in Robert Trent Jones, Inc. Nine years later, he founded his own design firm, Rees Jones, Inc., headquartered in his hometown of Montclair, New Jersey. Jones, who earned the nickname “The Open Doctor” for his course remodeling work at classic venues in preparation for major championships, has designed or redesigned more than 250 golf courses in his illustrious career.

TPC Danzante Bay, his first and only design effort in Mexico, stands at or near the pinnacle of his professional achievements.

We recently caught up with Jones to talk about his design assignment in Loreto.

Before the Q & A began, Jones volunteered the fact that “Owen Perry (owner) let me put the holes where they should be. It was a wonderful experience designing the course.”

Jones also shared a story. “Owen reminds me of Laurence Rockefeller, the visionary developer who saw a beautiful cove on the Big Island of Hawaii while cruising the Kohala Coast in the 1960s,” he said. “He hired my dad to build the now-famous course at the Mauna Kea Beach Hotel. Like Rockefeller, Owen is a pioneer who saw a beautiful bay (at the Islands of Loreto) from his boat. I told him that if he gave me the chance, I could build a world-class course on the parcel of land he had set aside for golf.”

Against all odds given its remote location, that’s just what happened.

Q. What were your first impressions when you saw the proposed site for the golf course?

A. I thought maybe it was the most diverse site for a golf course I had ever seen based on the unusual variety of landscapes. I had no pre-conceived ideas on what we would create. The course design is entirely site-specific. Owen wanted a course that average players could enjoy, and that’s what we set out to build, but it’s also a tournament-worthy test from the back tees.

Q. Wind is the ‘invisible hazard’ at TPC Danzante Bay. How much did the prevailing breeze influence you in determining the direction of the hole corridors?

A. The prevailing wind didn’t really influence our placement of the holes. The fairways, tees and greens we designed fit the land perfectly. We tucked holes into coastal dunes and valleys and along ridges in the foothills of the mountains. We created alternate routes of attack, which is an often overlooked aspect of golf course design. We built a course that can offer different shot options on a day-to-day basis simply by moving the pins and shifting the tees.

Q. Unlike many modern courses, the greens at Danzante Bay are very subtly contoured, with no pronounced undulations. What was the thought process behind the creation of the layout’s greens?

A. There are no major transitions in the greens. There are gentle sweeps and mild contours in the putting surfaces. Given modern green speeds, we had to be mindful of the effect of the wind. To accentuate playability, most of the entrances to the greens are open, allowing approach shots to run on safely. 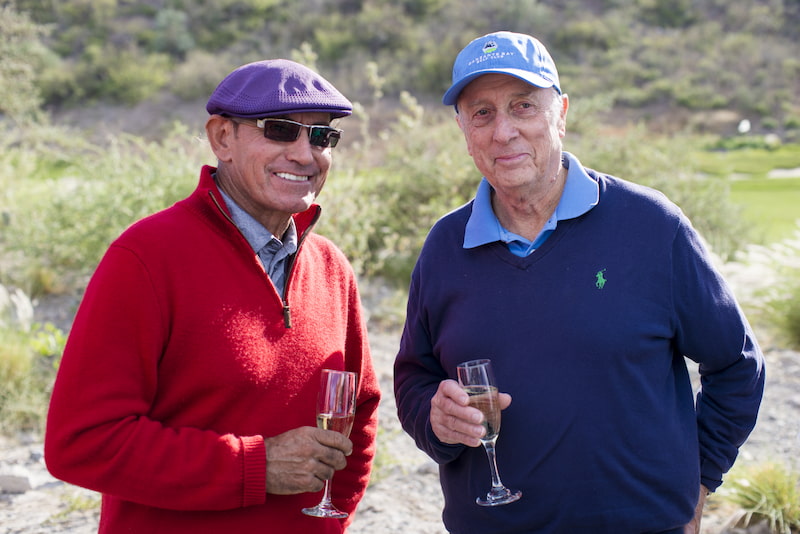 Q. The golf course has many memorable holes, but the 17th hole has been recognized as one of the finest and most scenic par 3’s in the world. The hole wasn’t in the original blueprint. Can you talk about how it was ‘discovered’ and built?

A. It’s true, No. 17 wasn’t in the original routing plan, but one day I was walking the site with (design associate) Steven Weisser and we came upon a rocky peninsula projected into the sea. To his credit, Owen loved the concept of the hole, which sits 250 feet above the sea, and was willing to sacrifice multi-million dollar lots in order to create it. It took a long time to build. It helped that we built the entire course in house under the direction of construction manager Randy Ruth. Our bunkers, by the way, are strategic features, carefully placed. The greenside bunkers at No. 17 may appear to be penal, but they’re there to prevent mishit shots from more severe penalties (like ending up on the rocks or in the sea). 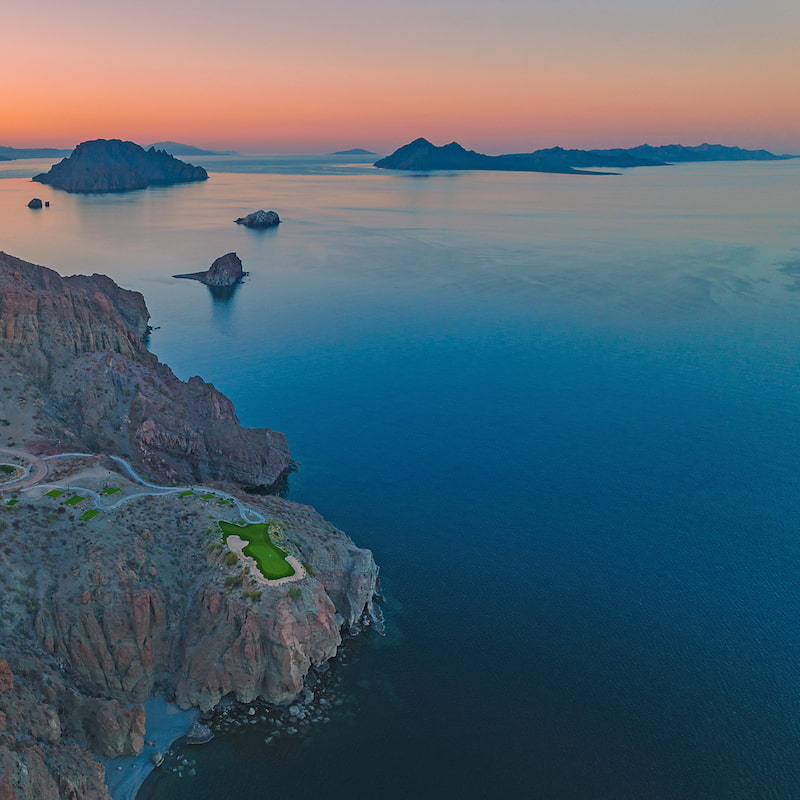 Q. The course is surfaced from tee to green in paspalum, a salt-tolerant, disease-resistant turfgrass that requires fewer chemicals than normal grasses. Can you explain why paspalum is a good fit for the club’s climate and soil conditions?

A. We have a limited water supply for course irrigation at the resort, and what we do have is brackish. (Villa del Palmar has two desalination plants in operation). Paspalum is a vigorous grass that does well in tropical coastal regions. It has a thick canopy that perches the ball, and the roll of the ball on the greens is consistent and true.

Q. TPC Danzante Bay fully opened as an 18-hole course in 2018. Are you happy with the way it has evolved and been received by members, resort guests and the international media?

A. I’m happy with what Owen let me do and the freedom he gave me to build a very special golf experience. At different points on the course, there are views of water, mountains, desert, dunes, arroyos and offshore islands. It’s remote, but it’s worth traveling a long way to play. Once golfers get here and play it, they’re very happy they made the trip. Overall, the course is fair, challenging and visually exciting. There are so many exceptional holes. The plateau fairway at the par-5 second traces the edge of an arroyo at the base of a 200-foot bluff. The sixth and seventh holes proceed in opposite directions within an enclosed box canyon. The par-3 ninth would be singled out as a great hole anywhere else. And the uphill 15th and 16th holes, both very strategic, set the stage for the dramatic 17th hole. 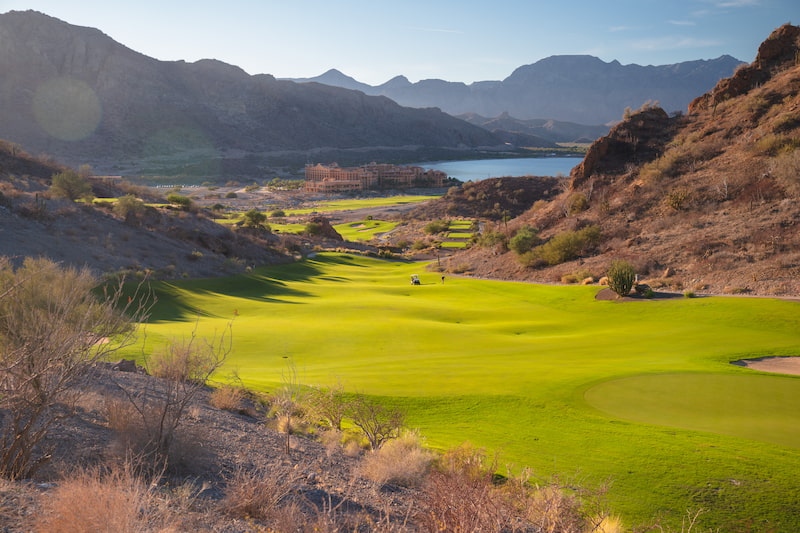 NOTE: Since its debut, the Rees Jones-designed course at TPC Danzante Bay has been recognized as one of Mexico’s premier golf facilities. Among its many accolades, the club was the recent recipient of a 2022 Golf Digest Editors’ Choice Award in the ‘Best Golf Resorts in the Mexico & Central America’ category.