5 Reasons why TPC Danzante Bay is a Bucket List Course

Published on February 25, 2022 On Destination, Golf

An unforgettable test of golf draped across a spectacular site, TPC Danzante Bay showcases a diverse array of golf holes that build in drama and interest as the round progresses. An aesthetic tour de force, the layout has a rare topographic blend of desert, mountains and coastal dunes, with a 250-foot elevation change from start to finish. The multi-themed course takes players through a variety of settings, including steep-walled canyons, meandering arroyos and rolling foothills at the base of the majestic Sierra de la Giganta range. Holes throughout feature panoramic views of the sea, the mountains and the surrounding Islands of Loreto, a national marine park. While not technically a links, TPC Danzante Bay pays homage to how golf originated–at the place where the land meets the sea. 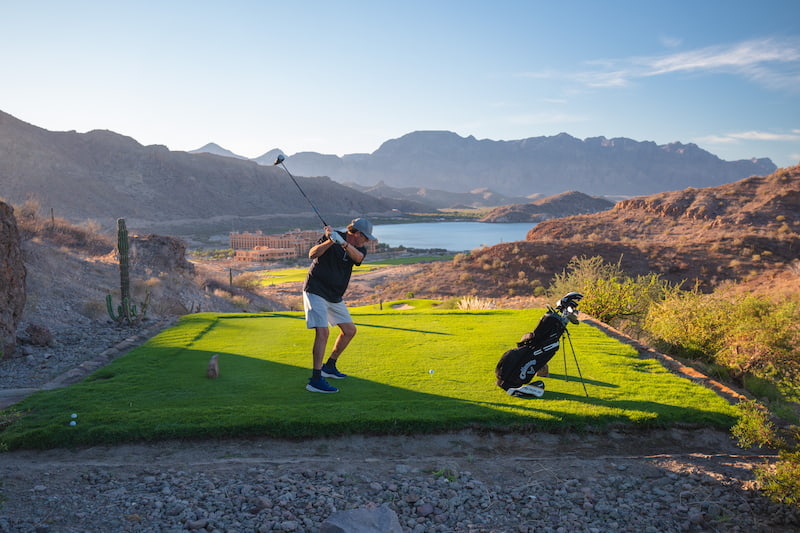 Course designer Rees Jones is not one to puff out his chest about his work. A traditionalist, he wants his creations to “stand the test of time” and offer continuing interest for golfers at all skill levels. And so when he speaks, it’s on the level. “Most of the world’s most popular golf courses were built slowly,” Jones explained. “Golf holes aren’t really designed and built from a plan–you feel them in the land. This land was so good it told us what to do. The holes fit the land naturally.” Shortly before the course opened in 2017 (and before it joined the TPC network, only the fourth international facility to do so), Jones said of Danzante Bay, “This is a golf course that both avid and casual golfers will want to travel to play, enjoy and experience.” He added that multiple sets of forward tees enable the course to be played by any caliber golfer. “The golf course has open entrances, pockets and sandy areas to capture the ball and keep it from going into the desert,” he said, attesting to its versatility. “We’ve kept the green contours mild so that the putting surfaces are manageable in the wind. People will want to play this course over and over again because the conditions change with the wind.” And because of the wind, which shifts direction and can blow soft or strong, this bucket list course is a new adventure every day. 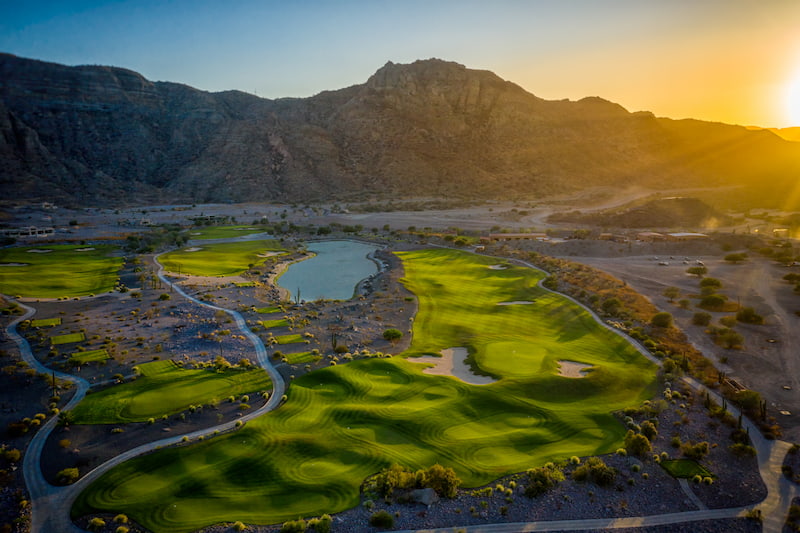 No. 17, a jaw-dropping par 3 and the signature hole at TPC Danzante Bay, was not in the original routing plan. Villa Group owner and president Owen Perry had noted the existence of a slim rocky peninsula jutting into the bay in the general area of the proposed back nine. Could a golf hole be constructed atop a peninsula that dropped off on three sides to the sea far below? Discussions ensued. Based on the drama prospects for a world-class penultimate hole, the initial routing was altered and a few rock outcrops were displaced to make way for this extraordinary creation, a truly breathtaking par 3. For first-timers, the fun part is that the transition from the 16th green to the 17th tee gives little indication of what lies ahead. After cresting a ridge, golfers are suddenly met with a dazzling view of the Sea of Cortez 250 feet below the tee. This stupendous par 3 plays sharply downhill to an exposed green yoked by a horseshoe-shaped bunker. The putting surface, clinging to a rock outcrop at the tip of the peninsula, commands a land’s end prospect high above the glittering sea and distant islands. Here’s how Golf Course Architecture described Danzante Bay’s 17th hole: “As spectacular a one-shotter as exists on any course in the world.” 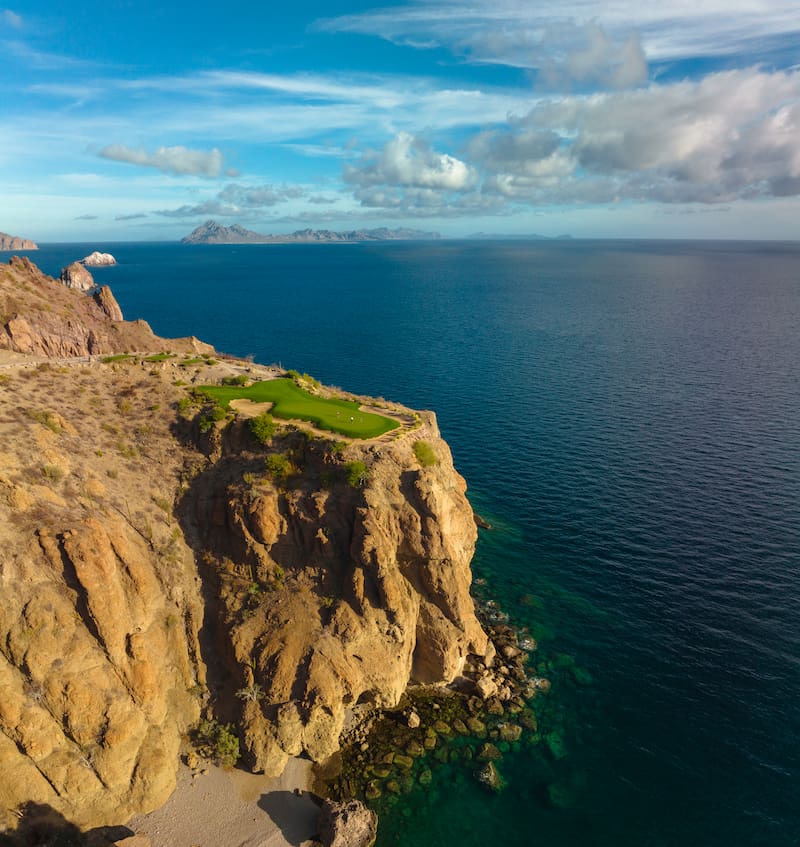 During the winter months, it’s not uncommon to see breaching whales on their annual migration from the chilly waters of Alaska to the balmy Sea of Cortez from the top-of-the-world tee and green at No. 17.

Perry partnered with Jones because of the designer’s talent for building challenging yet player-friendly courses that complement a site’s habitat and co-exist in harmony with nature. For example, Danzante Bay utilizes two strains of Paspalum, the salt-tolerant, disease-resistant turfgrass that uses a fraction of the chemicals and fertilizers required by normal grasses. This unique turfgrass is irrigated with water drawn from an upgraded reverse-osmosis plant. There’s more. “Being located in a protected marine park, we adhered to stringent environmental rules, and we gladly accepted the challenge, because we felt that that was going to keep the Islands of Loreto unique,” Perry stated. “When I first saw the land where we were building this golf course, I was stunned by the amazing beauty of both the mountains and water that surround it. Sunrise each day gives the mountains a brownish hue and when the sun sets at night, they turn a vibrant red. And the views of the bay are without question some of the best I’ve ever seen. We literally carved this golf course into this incredible setting while maintaining all of its natural beauty.” 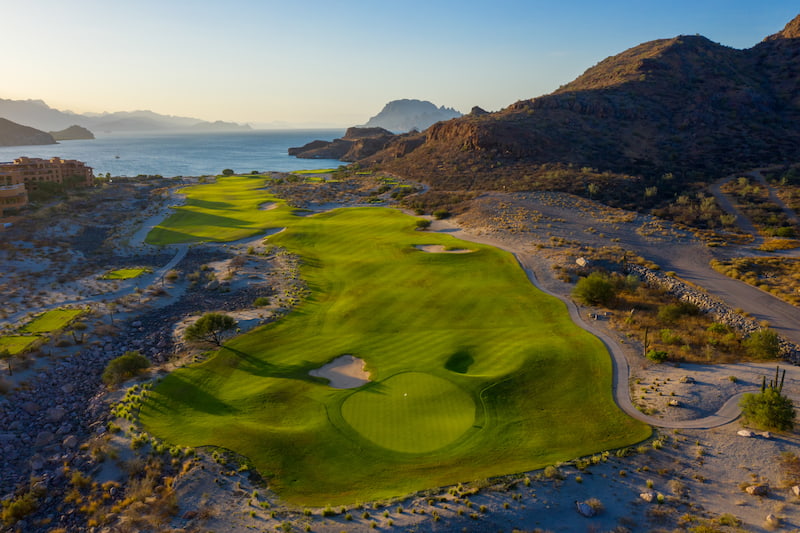 Aug 18 TPC = Tournament Players Club. What does it mean to...
Previous Post Next Post
All together now… . . # golfcourse #mexico #mexi